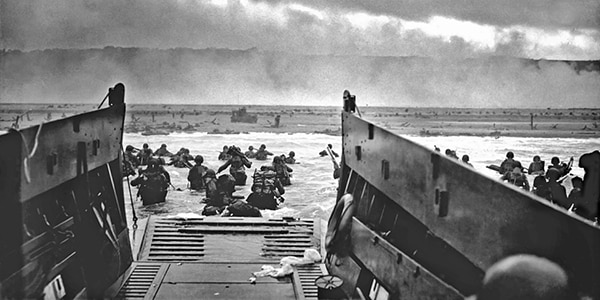 As Europe and its allies mark 75 years since the D-Day landings, stories surrounding this historic day are still being uncovered.

Andre Gantois is a retired French postal worker who had given up on ever finding out who his father was. The US serviceman was one of the 160,000 Allied troops that stormed the heavily-fortified 50-mile stretch of Nazi-occupied coastline in Normandy.

“Throughout my life, I lived with this open wound,” Gantois told the Associated Press. “I never accepted my situation, of not knowing my father and, most of all, knowing that he didn’t know about me, didn’t know of my existence.”

As a young man, Gantois became determined to find out more. Visits to US offices in France proved fruitless. He recalls on one occasion that an embassy official told him: “‘A lot of people are looking for their fathers, because they want money, they want to be compensated by the US government. But you have to have proof.’ I had no proof.”

Gantois was finally able to put his mind to rest and fill in a missing piece of wartime history thanks to a DNA test. Urged on by his daughter-in-law, Gantois took the test and weeks later he received the astounding results.

“‘You have an American brother, a sister, a whole family,’” Gantois recalls his daughter-in-law telling him. “I didn’t know what to say.”

The DNA test revealed that his father had been Wilburn ‘Bill’ Henderson from Essex, Missouri, USA. Gantois has since been able to put the pieces together and knows that his father had landed on Omaha beach, fought his way across France, been shot in the head, and been nursed back to health in a military hospital by Gantois’ mother, Irene. After Germany’s surrender in May 1945, Henderson had visited Irene at her home in eastern France. Apparently, she never told him that she was carrying his child. He returned to the USA, started a family and never spoke about her before his death in 1997.

The trail would have ended there for Gantois had his American half-brother not also taken a DNA test. The two men and Gantois’ half-sister have since met up in France.

Both Gantois and his half-siblings acknowledge how lucky they are not only to have found each other but also that their father survived Normandy and its aftermath.

DNA testing is the most scientific and accurate way to prove that two or more individuals are biologically related. Sibling DNA testing can establish whether brothers and sisters share the same mother and father (full siblings), or share either the mother or the father (half-siblings). In AlphaBiolabs’ Sibling DNA test the two alleged siblings are required to provide a DNA sample. Our in-house geneticists then use statistical analysis to evaluate the amount of DNA shared between the individuals tested. Full siblings will usually have more DNA in common than half-siblings, zand half-siblings normally share more DNA than unrelated individuals.

The sibling DNA test can be ordered online for just £199 with guaranteed results or your money back. To view all our DNA testing services, please visit our website https://www.alphabiolabs.co.uk/services/dna-testing/. If you have any queries or require further information, please call AlphaBiolabs on 0333 600 1300 or email info@alphabiolabs.com.