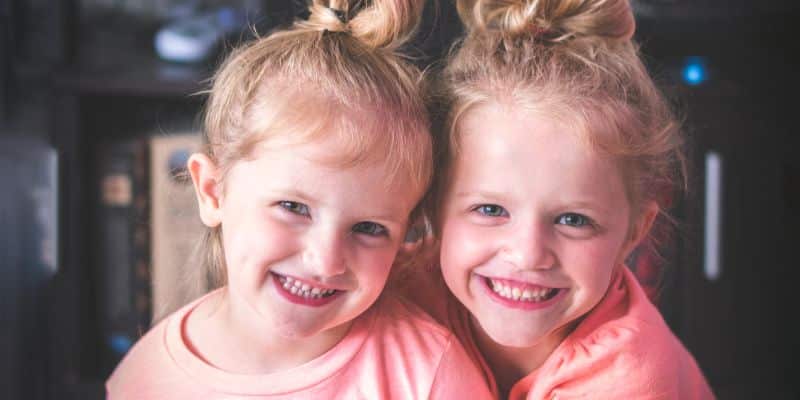 Identical twins are formed from a single fertilised egg, which went on to split into separate embryos. This means that their DNA is exactly the same.

Zygosity testing, or twin testing, is used to determine whether multiple children from the same birth are genetically identical or not. This twin DNA test only needs cheek buccal cells so samples can be easily and painlessly collected.

Multiple births are becoming more common because of fertility treatments and the fact that women are waiting later to have their babies. In the UK, twins happen in about 1 in every 65 pregnancies (1.5%). This is a big increase from 1984, when 1% of every birth was a multiple birth.

African–American women are more likely to have twins than any other race. Asian and Native Americans have the lowest rates of twins.

In total, around 12,000 sets of twins are born in the UK every year. Non-identical (or fraternal) twins are more common: two-thirds of all twins are non-identical and one-third are identical.

Identical twins appear to be a random occurrence. There’s no evidence that being from a family with identical multiples has any impact on the odds of having identical twins.

Non-identical twins do run in families

Twins really do skip a generation

The myth about twins skipping a generation is actually based on some truth. If a man inherits the hyperovulation gene from his mother (see #3), he may pass this gene on to his daughter. His daughter, in turn, is then more likely to release more than one egg when she ovulates and therefore could conceive non-identical twins. The twins have therefore skipped a generation.

If they share the same DNA, surely identical twins must have identical fingerprints? Well, surprisingly not. Identical twins start out with the same fingerprints when they are conceived, but as the foetuses develop in the womb they are affected differently by small changes in the womb environment, such as fluctuations of hormone levels. In addition, as the twins start to move and touch the amniotic sac, unique ridges and lines are formed that result in different fingerprints. This is thought to occur around weeks 6–13 of the pregnancy.

In the same way, identical twins also don’t have identical freckles. The pattern of freckles and moles on the skin is caused by random mutations and will vary between identical twins.

Twins could have different dads

This is due to a medical phenomenon known as superfoetation. It occurs when a pregnant woman continues to ovulate and releases an egg a few weeks into her pregnancy. The second egg is fertilised, and the woman is then pregnant with two babies simultaneously.

Usually, when a woman becomes pregnant, several biological processes happen to prevent her from getting pregnant a second time. Hormones are released that halt ovulation, a ‘mucus plug’ develops in the cervix to prevent sperm from traveling to the uterus, and the lining of the uterus changes, making it hard for another embryo to implant.

Superfoetation may go undetected because the two foetuses are so close in age that they may be considered twins. It is extremely rare in humans but is claimed to be more prevalent in animals such as rodents, rabbits, horses and sheep.

High rates of twins are found throughout Central Africa. With 27.9 twins per 1000 births (2.8%), Benin has the highest national average.

Mirror image twins account for about one-fourth of all identical twins. In these rare cases, identical twins develop directly facing each other, meaning they become exact reflections of one another. If one twin is right handed the other twin is left handed, they may have birthmarks on opposite sides of their body and can even have hair that whorls in reverse directions.

Mirror image twins are thought to occur when the twins split from one fertilised egg later than usual. This can be over a week up to 12 days after conception and the two identical halves develop into separate individuals who are genetically identical. A fertilised egg that splits after 12 days would likely result in conjoined twins.

Tall women are more likely to have twins

Taller women apparently have more insulin-like growth factor (IGF): a protein that is released from the liver to stimulate growth in the shaft of longer bones. Higher levels of IGF results in increased sensitivity of the ovaries, thus increasing a woman’s chance of ovulating. According to Dr Gary Steinman, an attending physician at Long Island Jewish Medical Center, the more IGF a woman has, the greater chance she has of becoming pregnant with twins, because IGF “governs the rate of spontaneous twinning”. In a previous study, Dr Steinman also found that women who eat dairy are five times more likely to have twins. This has been put down to levels of IGF in cow’s milk.

Twins have a secret language

A phenomenon known as cryptophasia (from the Greek for ‘secret’ and ‘speech’) describes a language developed by twins in early childhood which only they understand. Cryptophasia is thought to occur in up to 50% of identical or non-identical twins.

The secret language is formed when two very close babies are learning how to speak a real language alongside one another and naturally often play and communicate with each other. As such, it is more common among twins because they are more likely to be around each other and developing at the same rate; although the phenomenon can also sporadically occur between two babies who are not twins. The language consists of inverted words and onomatopoeic expressions, and often disappears soon after childhood once the children have learned a real language.

Zygosity twin testing is used to determine whether twins are genetically identical or not. Click here to get your results the next day, for just £99.