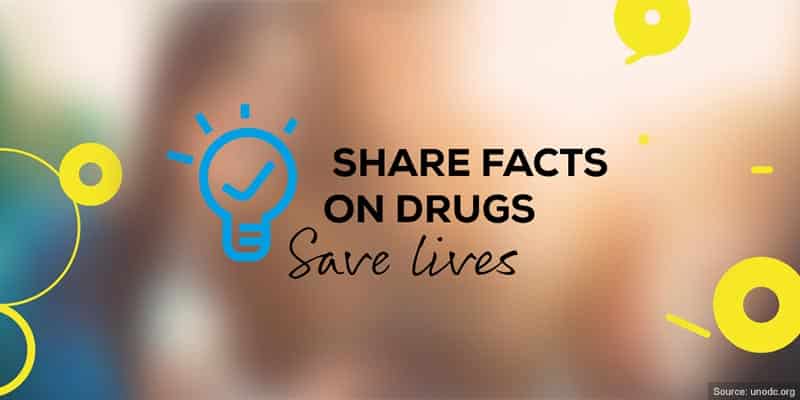 As part of its commitment to working towards creating a drug-free society through international action and cooperation, the United Nations Office of Drugs and Crime (UNODC) dedicates 26th June each year to raising awareness of the global issues surrounding the supply and abuse of illegal drugs.

For this year’s International Day Against Drug Abuse and Illicit Trafficking (or World Drug Day as it’s also known), the organisation is encouraging everyone to #ShareFactsonDrugs to prevent the spread of misinformation and help #SaveLives.

Drug abuse statistics here in the UK broadly correspond with the global findings from the UNODC above. The Home Office’s latest Crime Survey for England and Wales (CSEW) reported that 1 in 11 adults aged 16 to 59 had used drugs in the last year. This figure was significantly higher amongst those aged 16 to 24, with 1 in 5 young adults having taken drugs during the same period. These findings are consistent with other countries around the world, who are also reporting higher levels of drug use amongst younger people.

Cannabis is by far the most used drug, with an estimated 192 million users worldwide. According to research by the UNODC, over the last two decades the potency of cannabis has doubled in Europe and quadrupled in the United States, yet the perception of cannabis as a harmful drug has decreased amongst adolescents and young adults. Misinformation on the impact of medical and non-medical use of cannabis is a key contributor to this – an issue that is high on the UN’s agenda.

As a consequence of drug abuse, there is a reportedly high proportion of people suffering from drug use disorders. The UNODC estimates that around 35 million people globally experience harmful patterns of drug use or dependency that require treatment. In the UK, NHS Digital reported over 7,000 hospital admissions for drug-related mental and behavioural disorders in England during 2019/20, in addition to 16,994 admissions for poisoning by drug misuse. Stretched health authorities and specialist treatment services already have limited patient capacity, and private facilities are beyond the financial reach of many. So, the predicted increase in drug users in the future is a grave cause for concern.

With drugs becoming more accessible than ever due to online trading through the dark web, social pressures, and the notable increase in drug abuse amongst the young, getting people talking and sharing the hard facts about drugs has never been so crucial.

AlphaBiolabs provide a wide variety of legal drug testing services to family law firms and organisations involved in child welfare. We also offer workplace drug testing to protect your business and your employees. To learn more, get in touch with our Customer Services team on 0333 600 1300 or email info@alphabiolabs.com.