5 amazing women who helped change the shape of science 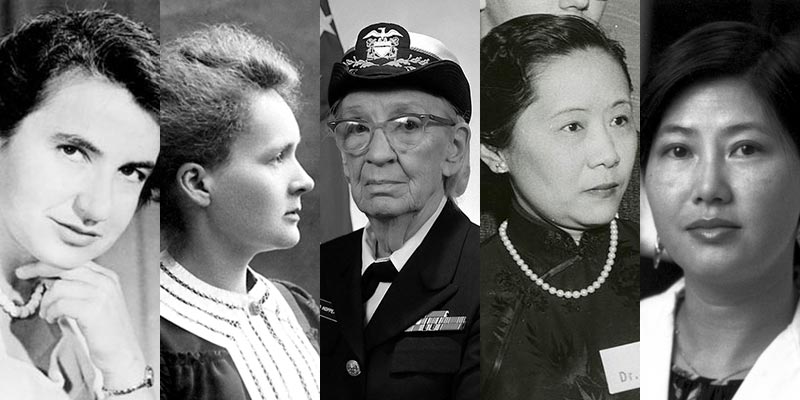 Throughout history, women have played vital roles in the scientific community but their contributions have often been overlooked.

At AlphaBiolabs, cutting-edge science is at the heart of everything we do.  As this month is Women’s History Month, we wanted to pay tribute to five female scientists whose work and ideas have helped shape the world we know today.

Born in London in 1920, Rosalind Franklin studied physics and chemistry at Cambridge before developing her skills in x-ray crystallography.

Her work was crucial in developing an understanding of the molecular structure of DNA.

While working at King’s College in London in the early 1950s, Franklin produced x-ray diffraction images of DNA and one of the photographs – known as Photo 51 – led to the discovery that DNA was a double helix.

Franklin’s death from ovarian cancer in 1958 at the age of 37 meant her achievement was never recognised in her lifetime.

Three men – Francis Crick, James Watson and Maurice Wilkins – shared the Nobel Prize in Physiology or Medicine in 1962 for discovering the helical structure of DNA, and Crick acknowledged that Franklin’s work had played a vital part in their achievement.

Marie Curie was born in Poland in 1867, attending a secret university for women to satisfy her thirst for knowledge, as the official institutions only accepted men.

At the age of 24, she went to Paris where she achieved degrees in both physics and mathematics.

In 1896, Curie began investigating why uranium salts glowed. She concluded that the glow must be down to uranium’s atoms having an unstable nucleus – a realisation that led to the discovery of radioactivity.

During the research she carried out with her husband, Pierre, Curie discovered two elements – polonium and radium.

She was awarded the Nobel Prize in Physics in 1903. She was also the first woman to work as a professor at the Sorbonne and she helped develop a portable x-ray that was used during the First World War.

Her death at the age of 66 was believed to have been caused by exposure to radiation during the course of her work.

At the age of seven, Grace Hopper took apart her alarm clock to find out how it worked and this curiosity about the world around her drove her entire career.

Born in the United States in 1906, she became a maths professor.  But when the Second World War broke out, she was keen to serve her country and wanted to join the US Navy. Rejected for being too old, she ended up joining the US Naval Reserve.  She was assigned to an electromechanical computer, known as the Harvard Mark I, and given the task of writing the first ever computer manual to help people understand how to use it.

After the war ended, Hopper went on to create a programming language, which was the precursor to COBOL.  At the age of 60, she went back into the navy with the aim of standardising computer languages. She remained in the navy as a commissioned officer until she retired at the age of 79.

The daughter of a teacher and engineer, Chien-Shiung Wu travelled a long way to get an education. Born in 1912, the small Chinese village where she lived had no school for girls, so she went to boarding school and then eventually to the United States to study, gaining a PhD in physics from the University of California.

She was one of only a few women to work on a top-secret operation to build the atomic bomb during the Second World War.

In the 1950s, she was approached by two theoretical physicists who wanted to prove that subatomic particles did not always decay symmetrically. She was able to successfully prove their theory with the Wu Experiment in 1956 but the Nobel Prize in Physics was given to her male colleagues and not to her.

Wu was the first woman to be elected president of the American Physical Society and her book, Beta Decay,remains an important reference text for those studying nuclear physics today.

Born in China in 1947, Flossie Wong-Staal was just five years old when her family fled the Communist revolution and went to live in Hong Kong, which was then a British colony.

After studying biology and microbiology, she began working at the National Cancer Institute looking at viruses. When a new disease appeared in the 1980s, Wong-Staal and her team were given the task of finding out more about it.

In 1983, they identified the human immunodeficiency virus (HIV) and recognised it as the cause of AIDS. After this landmark discovery, Wong-Staal helped develop a test for the virus.

Throughout her career, she has been a leading scientist in the battle against AIDS, working on treatments and developing more than 40 tests, inventions and procedures relating to HIV, AIDS and other illnesses.

AlphaBiolabs carries out a range of testing at its award-winning UK-based laboratory, including DNA tests, drug and alcohol and Covid-19 tests, tests. To find out more, call 0333 600 1300 or email info@alphabiolabs.com.