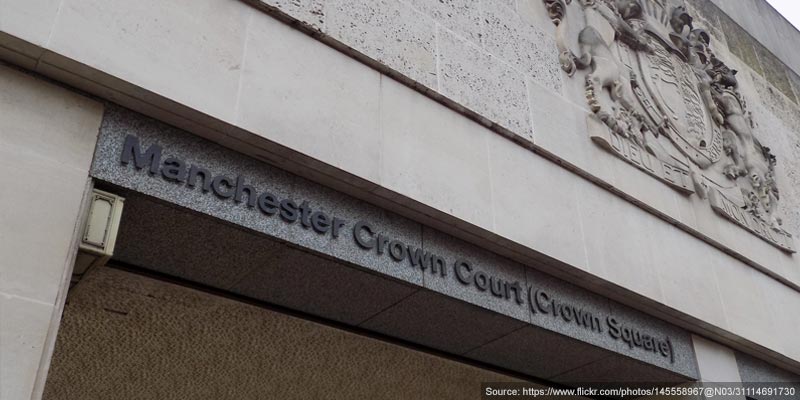 A cannabis drug-driver who smashed into a woman’s car while trying to escape from the police has been jailed for 3 years and 4 months. John Ramos, aged 23, admitting causing serious injury by dangerous driving at Manchester Crown Court. Tests showed he had 3.3mg of cannabis per litre of blood in his system. The drug-driving limit is 2mg per litre. He also pleaded guilty to driving whilst disqualified and having no insurance. He was also banned from driving for 8 and a half years.

Doctors feared the woman would be paralysed for life after Ramos ploughed into her Ford C Max at high speed. She suffered a badly broken neck, fractured vertebrae, which exposed her spinal cord, a broken ulnar, multiple broken ribs, a broken sternum, a collapsed lung and her pelvis was broken in two places. Ramos suffered a dislocated hip. After spending a week in intensive care, the woman confounded medics by being able to move all her limbs following two rounds of emergency surgery.

Two months after the crash, the woman is now back home, although her injuries have been described as life changing and she is bed-bound. She has breathing issues due to her injuries, caused by low levels of oxygen in her blood, and is in constant pain.

Ramos wept in the dock as the woman, a mother from Bury, said: “In the moments after the crash, the view of the police was that I was dead. However, I still managed to survive”.

“Doctors believed I would be paralysed but I can walk”, she said. Metal plates were inserted to support her head and neck.

“The surgeons were so amazed and were referring to me as their Christmas miracle.”

The crash happened just 6 months after Ramos, from the Fallowfield area of Manchester, was banned from the roads for 20 months after being caught driving while more than twice over the alcohol limit. Police spotted his VW Golf and ordered him to stop, but, as the officer got of his patrol car to speak to Ramos, he sped off and jumped a set of red traffic lights.

On his approach to a second junction, he was travelling in excess of 80mph and the traffic lights were on red for him. But as Ramos careered along the road, the woman was driving towards the same junction from a different direction and the lights were on green for her. The force of the collision caused the woman’s car to spin across the junction and collide with a bus before eventually coming to rest.

In mitigation, Defence Lawyer Adam Lodge said: “He made this poor decision to drive off born out of immaturity, selfishness and stupidity and was devastated at what happened”.

“He says he cannot sleep at night as he is thinking about her and he would like to say how sorry he is. He is also remorseful about the impact this will have on his family.”

Judge Martin Rudland told him there was no better example of someone being in the wrong place at the wrong time. It happened in a matter of seconds but this woman will have to live with the consequences of that for years and years. It’s a heart-breaking case.

“These were life changing injuries she will never fully recover from but she is doing her best in the early stages to get back what she has lost. Her career is gone, her life has been turned upside down. She will suffer from this for a long time.”

Drug-driving crashes across Great Britain have more than doubled in 5 years. In 2018, there were 1321 accidents where drivers were impaired by medicinal or illicit drugs, according to Department for Transport figures. This compares with 594 in 2014.

For information on any of AlphaBiolabs’ drug testing solutions, including our home drug testing kit and Workplace Drug Testing options, please call 0333 600 1300 or email us at info@alphabiolabs.com