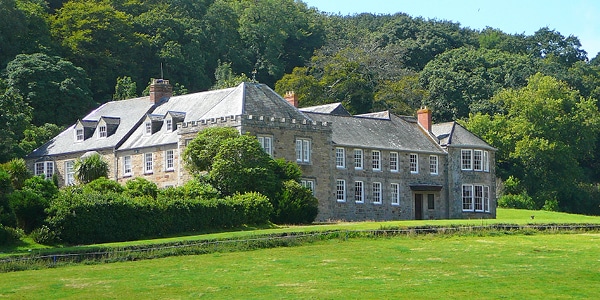 A former care worker has inherited one of the UK’s finest country estates, worth £50 million, after a DNA test proved he was the illegitimate son of the previous aristocratic owner. Jordan Adlard Rogers, aged 31, had spent years trying to prove that Charles Rogers, whose family had lived on the estate for generations, was his father. However, his efforts to secure a DNA test were repeatedly refused. However, when Mr Rogers died aged 62 of a drug overdose last August, a DNA test was finally performed and his cash-strapped son was finally proved to be the rightful heir. Jordan Rogers has now moved into the lavish Cornish house on the 1536-acre Penrose National Trust estate. The move means that Jordan and his partner, who gave birth to their first child last month, will not need to work again. However, Jordan insists that he would give it all up to have had the chance to steer his father away from the drug abuse that claimed his life. He is now determined to find out more about his father. An inquest heard that Mr Rogers had struggled with drug abuse for many years and died in his car outside his Grade-II listed farmhouse. Jordan had suspected that Mr Rogers was his father since he was 8 years old. He had asked for a DNA test several times but got no response. It was only after his death that the power of attorney arranged for a test to take place. “I’m starting to get my feet under the table here”, Jordan said. “People say I’m lucky but I would trade anything to be able to go back and for Charles to know I was his son. Maybe then he might have taken a different path.”

DNA testing is often relied upon to prove biological relationships because it is such an accurate test. In the case of probate and will disputes, a legal DNA test would be required. This means that for legally defensible results, the DNA samples would need to be collected under chain of custody conditions, whereby the samples do not leave the custody of those who are legally responsible for ensuring the authenticity of the DNA testing results. If a father has passed away, alternative DNA relationship tests can be performed to establish a direct biological relationship via other family members. Grandparent DNA tests, for example, could prove a link between an individual and one or more of their father’s parents. In the same way, DNA aunt testing or DNA uncle testing can be performed on the father’s sister or brother to establish a biological relationship to a child. DNA sibling testing can establish whether or not brothers and sisters have the same father. Another option is Y chromosome testing, which can prove that alleged male relatives share a common paternal line. All male children inherit their Y chromosome from their father; these children will in turn pass the Y chromosome inherited from their father to their children when they become fathers. A full match between profiles confirms a shared paternal line. If the father has only recently deceased, a DNA profile could be created from nail DNA testing. The nails would need to be collected by one of our trained sample collectors, funeral directors or occasionally by coroners. The sample collector must sign the sample collector declaration and a copy of the death certificate may need to be sent in as a form of ID. If you’re unsure on which DNA relationship test is right for your particular case, please call our Customer Services team on 0333 600 1300; email: info@alphabiolabs.com