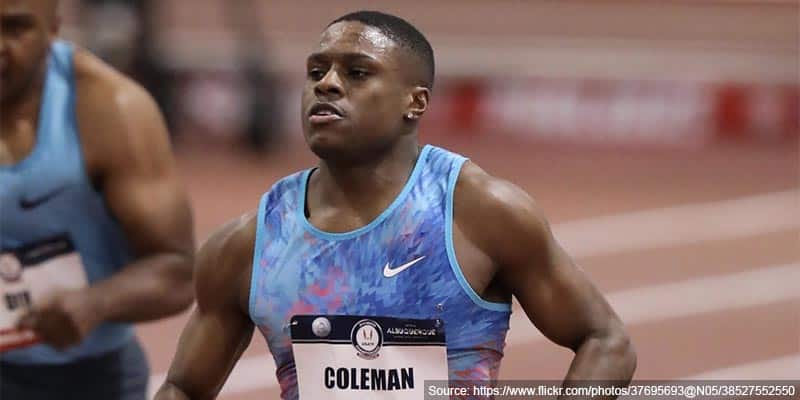 World 100m champion Christian Coleman faces the prospect of a 2-year ban that could see him miss next year’s Olympics. The World Anti-Doping Agency (WADA) has told the 24-year-old American that going on a Christmas shopping trip is no defence for missing a random drugs test. Neither is a drug tester having to call him to find out where he is.

Coleman who is said to earn close to a seven-figure salary from his sponsors Nike launched a lengthy defence of his actions on Twitter hours before he was provisionally suspended by the Athletics Integrity Unit (AIU) because of three ‘whereabouts’ failures in 2019. The athlete was said to be most upset at the circumstances surrounding the third of his missed tests on 9th December. He’s reported to have said that he was Christmas shopping “5 minutes away” and should have been telephoned by testers, “who didn’t even bother to call me”.

“I think the attempt on December 9 was a purposeful attempt to get me to miss a test”, said Coleman. “I’ve been contacted by phone literally every other time I’ve been tested … Why would the AIU tell him not to call me?!”

Coleman has also queried whether the drug tester had turned up at the right address in December and has called for ‘reform’ within the sport. “This isn’t justice for anybody. Not me, not them, not the sport, who wins here?”, he said. “I am willing to take a drug test every single day for the rest of my career for all I care to prove my innocence.”

Not able to comment on the specifics of an ongoing case, the AIU said in a statement that its drug control officers were specifically asked not to call athletes as it “provides an opportunity for evasion or other improper conduct which can limit the efficacy of testing. However, athletes included in the World Athletics International Registered Testing Pool must provide a 60-minute time slot (at any time between 5am and 11pm) and a specific location where they will be available for testing on any given date. Athletes are accountable for a missed test if they are not available at the specific location they have chosen for that 1-hour period.”

The AIU also stressed that WADA’s rules make it clear that a phone call to an athlete to inform them they want to conduct a test is discretionary. “The lack of any telephone call does not give the athlete a defence to the assertion of a missed test”, says the organisation.

Coleman insists he has never used performance-enhancing drugs. However, he faced a ban last year for three whereabouts failures but was cleared because of a technicality under anti-doping rules, which state the date of a first missed test should be pushed back to the first day of a testing quarter.

Earlier this month, Scotland’s hammer thrower Mark Dry received a 4-year ban for tampering with the anti-doping process that could spell the end of his career. The Olympian was also served with a whereabouts failure by missing an at-home test.

AlphaBiolabs offers a range of drug testing solutions for sports organisations, workplaces, the legal profession and members of the public. For more information, please call 0333 600 1300 or email us at info@alphabiolabs.com