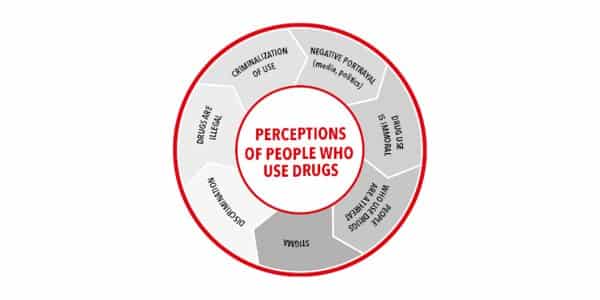 ‘Addict’, ‘drug abuser’ and ’junkie’ are negative terms that shouldn’t be used in today’s language when describing individuals with drug issues. These, and many other similar terms, are alienating and designate people who use drugs as morally flawed and inferior individuals, says a report issued today by the Global Commission on Drug Policy.

The report entitled ‘The world drug ‘perception’ problem: countering prejudices about people who use drugs’ has drawn up a checklist of what language should and should not be used. It is preferable to refer to a ‘person who uses drugs’ rather than a ‘drug user’. Calling those with non-problematic drug use as ‘recreational, casual or experimental users’ should be avoided. Negative language use also extends to people in recovery who are referred to as ‘clean’, which implies they were previously unclean or dirty. The term ‘drug abuse’ must be replaced as it conjures associations with abhorrent behaviour such as child abuse, says the report.

“In order to change how drug consumption is considered and how people who use drugs are treated, we need to shift our perceptions, and the first step is to change how we speak,” says the report authors, which include 12 past presidents and prime ministers.

The report cites United Nations Office on Drugs and Crime (UNODC) data that a quarter of a billion people aged 15–64 years used illegal drugs in 2016, of which nearly 12% were considered to suffer problematic drug use. By changing language and thus false perceptions, the Global Commission on Drug Policy hopes to reverse the stigma associated with drugs, which has an unfortunate double effect: the more society stigmatises and rejects people who use drugs, the fewer opportunities for treatment will be on offer. In addition, stigma drives individuals who need help away from those services that are available. Indeed, according to the UNODC, only one in six individuals with problematic drug use receives treatment.

The report’s authors – including former UN Secretary General Kofi Annan, Sir Nick Clegg and the entrepreneur Sir Richard Branson – have consistently called for drugs including cannabis, heroin and cocaine to be legalised and regulated. Nick Clegg has long demanded a change to UK drug policy, saying that the so-called ‘war on drugs’ was not working and that addicts needed support instead of a criminal record.

However, the report acknowledges that a change of perceptions and policies is already underway in some countries. As we reported this week, Norway has become the first Scandinavian country to legalise drugs. This follows Portugal, which decriminalised personal possession of drugs in 2001 and has seen a significant decrease in stigmatising views of people who use drugs. Following the 1976 legislative changes in the drug law in the Netherlands that decriminalised cannabis, the country today has the lowest level of problematic drug use in the European Union, and the overall prevalence of drug use in the general population is below that of both the European Union and the USA.

In the UK, AlphaBiolabs offers drug testing services. For information, call us on 0333 600 1300; email: info@alphabiolabs.com