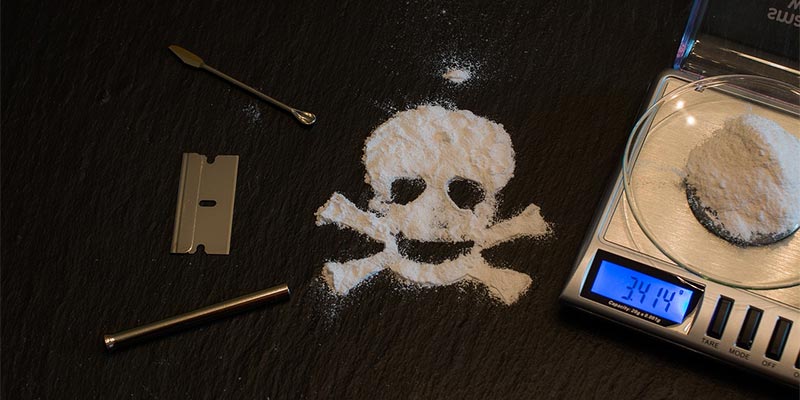 Deaths from cocaine poisoning in Wales have more than quadrupled in the past 5 years, according to figures released from the Office for National Statistics (ONS). Thirty-one people died from cocaine poisoning last year, compared with just seven in 2014. Hospital admissions have almost doubled during the same period, from 272 to 560.

The startling statistics come a week after a Europol report highlighted how European countries are now saturated with cocaine.

After the death of a mother of six last month, North West Wales coroner Dewi Pritchard Jones expressed concern at the numbers of deaths in the area connected to the drug. Lindsey Ann Hughes, from Angelsey, passed away after suffering respiratory failure due to bronchopneumonia. The 34-year-old was 15 weeks pregnant at the time of her death and was found to have abnormally high levels of cocaine in her system. The coroner said it was ‘not a drug death’ but that cocaine toxicity was a contributing factor.

Mr Pritchard Jones told an inquest in Caernarfon: “If she had not taken cocaine in the past the probability is that she would have survived the bronchopneumonia, but we cannot be sure.”

He then issued a warning to the public that cocaine can and does cause long-term issues. A post-mortem examination revealed that Miss Hughes had damage to her heart known as cardiac fibrosis, which can be caused by chronic cocaine use.

Mr Pritchard Jones said: “I am seeing far too many cocaine deaths as the use of cocaine in this part of the world is very common. Cocaine damages the heart by killing off patches of heart tissue and causes a tightening of the vessels. Even low levels of cocaine can cause catastrophic results and repeat use causes more and more damage. The public think cocaine doesn’t do any long-term harm but it does.”

Increase in cocaine on post-mortems

Staff who conduct toxicology reports as part of post-mortem examinations are seeing an increase in deaths where cocaine was involved.

“We find more and more cocaine these days”, said Avril Wayte, Head of the Department at Ysbyty Gwynedd in Bangor that carries out toxicology reports for the coroner.

“In the 1990s, we wouldn’t find anything much. But in the first 6 months of this year we’ve found cocaine in 20 post mortems”, she said.

“People think that cocaine isn’t that bad. They think ‘I can take cocaine on Saturday night, no problem, fine, it won’t affect me. But someone can have a stroke or heart attack. Cocaine really affects the heart. There are so many things that can happen where the heart stops beating and someone dies.”

Llinos Môn Owen, aged 32, from Anglesey, started taking cocaine aged 18 and would spend £1000 a month on the habit rather than pay rent or buy food.

“As the years went by and I went on to take stronger cocaine, I just couldn’t stop”, said Ms Owen.

She told the BBC that she has now turned her life around. For the past 2 years, Ms Owen has been attending recovery sessions at Bangor’s Penrhyn House and now wants to raise awareness about the potential harm of the drug.

“Addiction doesn’t just affect one person, it affects families and all those around that person”, she explained. “I lost my job. I lost my sanity. I almost lost my family. They just didn’t know what to do with me anymore. The impact is massive.”