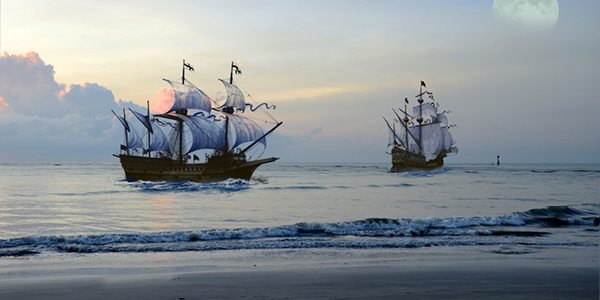 Blackbeard, Jack Sparrow and Captain Hook are well known pirates, but another name should be added to this list: Black Sam Bellamy. Called the most successful pirate of all time, experts believe his remains have been found in a shipwreck in the Cape Cod peninsula in Massachusetts, USA. DNA tests are now being performed on his last descendant to prove if the bones really belong to the buccaneer.

Black Sam Bellamy, also known as Captain Samuel Bellamy, was an English pirate who operated in the early 18th century. Although his career as a pirate lasted little more than 1 year, he captured at least 53 ships, making him the wealthiest pirate in recorded history. The name of Black Sam derived from the way he tied back his long black hair instead of following the fashion at that time of wearing a powdered wig. Pirates are often known for their ruthlessness but Black Sam has been likened to the Robin Hood of the pirate world. He seemed to avoid violence and became known for his mercy and generosity towards those he captured on his raids. He was only 28 years old when he died.

US author Casey Sherman knew that Black Sam originated from Hittisleigh in Devon and started calling everyone he could find with links to the area with the same last name as the pirate. He eventually found 33-year-old Simon Bellamy from Wellington in Somerset. As the last in the bloodline of Black Sam, Mr Bellamy has volunteered his DNA for comparison against the remains found in the shipwreck. Before being contacted by Mr Sherman, he’d had no idea about his ancestral links to Black Sam. He has since researched his famous ancestor.

“I’ve been speaking to Casey for the past few months and the story of Black Sam is fascinating. He seemed like he was quite the character”, said Mr Bellamy. “It’s more than 300 years since his death and this is meant to be one of the archaeological discoveries of the decade so it is exciting to potentially play a small role in it.”

A mouth swab containing the DNA will now be analysed. Results should be announced in a month as to whether the bones belong to Black Sam.

“Once we determine if it is the captain we want to bring the bones back to the UK so he can be buried with his family. He spent 300 years in the shipwreck, in the sea, it’s time to bring him home”, said Mr Sherman.