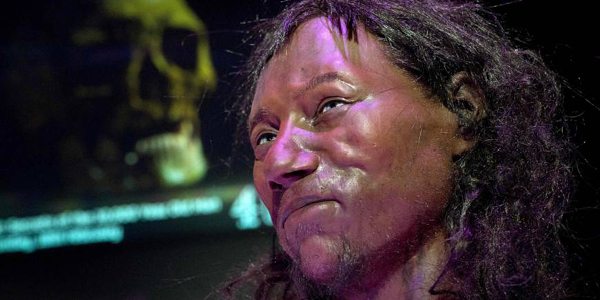 DNA tests on the oldest complete skeleton discovered in Britain indicate that he had black skin and blue eyes. Named the Cheddar Man, the remains were unearthed 115 years ago in Gough’s Cave in Somerset’s Cheddar Gorge. Previous research showed that the man was 5ft 5in tall and probably died in his early 20s.

The latest research by the Natural History Museum and University College London (UCL) is the first attempt to pinpoint the skin tone of Britons from the Mesolithic era. DNA was extracted from a bone near the ear of the skeleton by UCL researchers who then used genome analysis to attempt facial reconstruction. This is the first time that a prehistoric Briton of this age has had their genome analysed.

At first, the researchers were unsure as to whether they’d get any DNA at all from the remains. However, not only was DNA preserved, the Cheddar Man has since yielded the highest coverage (a measure of the sequencing accuracy) for a genome from the Mesolithic period (also known as Middle Stone Age). The researchers discovered that the Stone Age Briton had dark hair, blue eyes and skin that was probably dark brown or black in tone. As such, the finding suggests that the lighter skin characteristic of modern Europeans is a relatively recent phenomenon.

The analysis has also provided valuable new insights into the first people to settle in Britain after the last Ice Age. The genome reveals that Cheddar man was closely related to other Mesolithic individuals (so-called Western Hunter-Gatherers) who have been analysed from Spain, Luxembourg and Hungary. Pale skin probably arrived in Britain with a migration of people from the Middle East around 6000 years ago. Europeans today owe on average 10% of their ancestry to Mesolithic hunters like Cheddar Man.