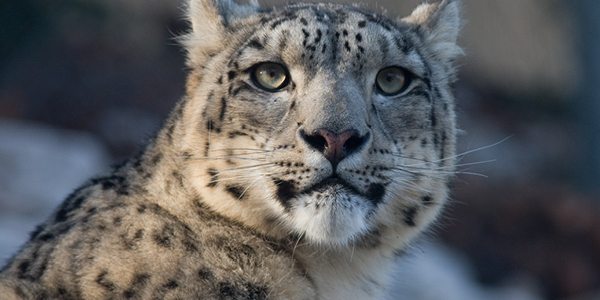 Snow leopards are well known to be elusive creatures and it is very rare to see one in the wild. They live in mountainous terrains at elevations from 3000 to 4500 m. Despite their isolation and altitude, the species is under threat. As well as an illegal trade in snow leopard parts, humans are hunting the leopards’ prey, making it harder for them to find food. In addition, there is evidence that the common leopard is now invading the snow leopards’ territory, partly because of the destruction of its own habitat, and because of the rising snow line caused by global warming.

The areas that snow leopards inhabit are extremely difficult to traverse, making it hard to survey their numbers. For researchers to reach the snow leopards, or to gather any evidence of them, it can take a day or more of climbing. As such, population estimates vary wildly. As of 2016, estimates for the size of the global population varied from at least 4080 to about 8700 individuals.1

Without robust information on numbers, it is difficult to make correct conservation decisions. The International Union for Conservation of Nature has just downgraded the snow leopards’ listing from endangered to vulnerable. The move has brought condemnation from conservation groups, including the Snow Leopard Trust, which says “more robust science is needed to ensure an accurate assessment before revising the status”.

Hopes are now being pinned on a novel test that analyses the snow leopards’ poo, known as scat. Scats can be used to give population estimates and even to track the leopards across a landscape because you can get a DNA sample from them. However, identifying snow leopard scats poses a problem. The scat samples gathered can be confused about 50% of the time with common leopards, wolves, foxes and domestic dogs. It’s an expensive and time-consuming process to accidentally bring a wrong sample back.

Australian conservation geneticist Natalie Schmitt hopes that the new snow leopard DNA testing kits will come to the rescue. This is a paper-based DNA test that will flag in situ whether the scat is a snow leopard poo or not, saving a lot of time, energy and frustration all around. By applying a little sample of the scat, the paper changes colour if the DNA present is snow leopard. Dr Schmitt believes in the idea so much that she is crowdfunding the research.

“There are restrictions to your ability to really make a project work in university and government environments,” she says. “I wanted to take the risk and go it alone … this is such a labour of love for me.”

Dr Schmitt believes that the DNA test could have broader applications for the study and preservation of elusive, rare and endangered animals across the world.

People can donate and find out more about this project at www.natscatsdna.com.