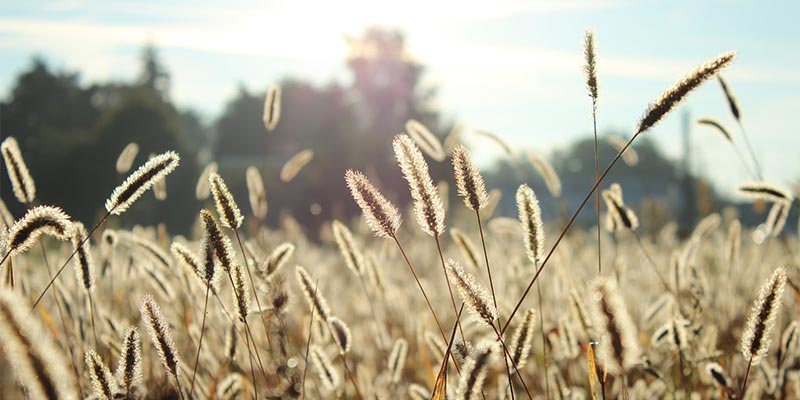 DNA of pollen produced by common varieties of grass is being studied by scientists hoping to alleviate hay fever. Around 20% of Britons suffer with hay fever symptoms throughout the summer months, such as constant sneezing, running noses and watering eyes. The condition can be crippling for some and can cost hundreds of millions of pounds in days off work.

The researchers from Bangor University are sampling 40 common species of grass, including cocksfoot, Timothy and meadow foxtail, to find out which specific types cause the reaction. The team believes that only a few varieties of grass trigger hay fever. If the relative amount of specific pollens is high, it may explain why some people suffer severe symptoms on days when the overall pollen count is low.

Professor Simon Creer, who is leading the research, hopes their work will lead to more precise grass-by-grass pollen counts.

“It could even extend to making recommendations to turf manufacturers and grass seed producers as to which species of grass are not as strongly associated with hay fever symptoms”, he said. “That could mean that developers could avoid them when building new schools, hospitals or housing estates.”

Some people are immune to grass pollen, but get itchy eyes and start sneezing due to tree pollen, says Professor Creer. His team of researchers have partnered with the Met Office and deployed pollen collection traps across the UK. This, they hope, will tell them what specific types of pollen are common in the air at specific times.

By comparing this data with information from hay fever sufferers attending their GP surgery, or even hospital, could help them understand what pollen strains affect people the most.

DNA analysis is needed to distinguish pollen from one plant from another.

Professor Creer said: “If we can identify the species of grass that are contributing more to the allergenic load then that informs us that we can try and avoid those species whenever possible.”

As well as weather forecasts stating whether pollen levels are low, medium or high, the team hope that in the future, that information will be complemented by identifying the different kinds of pollen that are around.

“If we see a spike in a particular kind of pollen at the same time that hay fever is increasing you can work out where the hot spots are and which pollen is in that area.” To view AlphaBiolabs’ DNA testing services, please visit our website https://www.alphabiolabs.co.uk/services/dna-testing/. If you have any queries or require further information, please call the experts in DNA testing, on 0333 600 1300 or email info@alphabiolabs.com