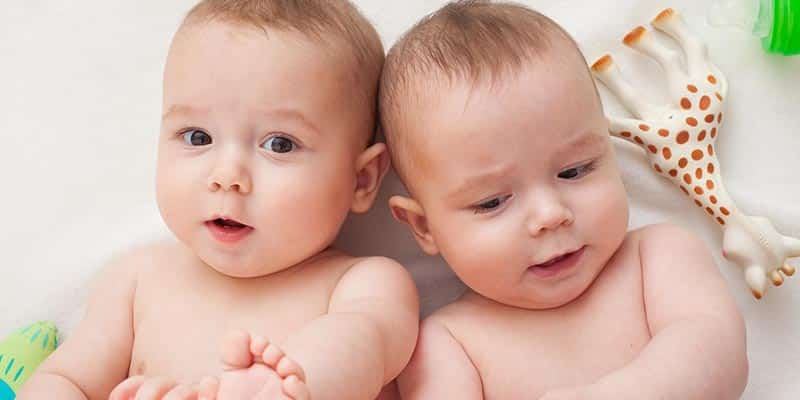 According to a comprehensive study earlier this year, twins might be more common today than at any time in history.

Twins are conceived naturally when a fertilised egg spontaneously splits in half, leading to identical twins, or when the mother releases two eggs at once and both are fertilised, producing non-identical twins.

While the birth rate for identical twins has barely changed, the survey authors found that the rate of naturally conceived, non-identical twins and twins born as a result of medically assisted reproduction had risen across the world.

The main reasons for this are increased access to hormone treatment, IVF, and other fertility services. The postponement of parenthood has also played a part – the likelihood of having natural, non-identical twins increases with age and peaks in women aged between 35 and 39.

Researchers analysed records from over 100 countries, and found a significant rise in twin birth rates since the 1980s. Over the past 40 years, the global twin birth rate has risen by one third. One in 42 people is now born a twin, equivalent to 1.6 million children each year!

Globally, twinning rates have risen from nine to 12 per 1,000 births since the 1980s, with the picture varying from country to country. North America, Europe and Asia all saw the biggest rises at 71%, 60% and 32% respectively.

Africa has a high rate of twins born naturally from two separate eggs, while the study revealed that 80% of twins are now born in either Africa or Asia.

In the UK, twinning rates rose around 62%, but are believed to have fallen since the Human Fertilisation and Embryology Authority (HFEA) launched a campaign to reduce multiple births in 2007.

However, the most recent data suggests that some countries have already started to see twin birth rates plateau, or even fall. Rather than seeing the trend accelerate, the authors of the study believe that the world may have reached “peak twin”.

Christiaan Monden, a professor of sociology and demography at Oxford University said: “The trends are really quite striking. Over the past 40 to 50 years, we’ve seen a strong increase in twinning rates in rich, developed countries, and that has led to more twins in both a relative and an absolute sense than we’ve seen ever before.”

Raj Mathur, the chair of the British Fertility Society said: “It doesn’t surprise us that twinning rates have increased because the availability of assisted reproduction has increased and also because women are slightly older when they have their first children, and both those things will increase the twin rate.”

AlphaBiolabs offer a comprehensive choice of DNA testing services, including our popular twin DNA test. Order online now to find out whether twins are identical or non-identical. We can also provide baby gender testing if you’re expecting!

To find out more about our DNA testing services, contact our friendly Customer Services team on 0333 600 1300 or email info@alphabiolabs.com.