We are supporting Jeans for Genes 2021 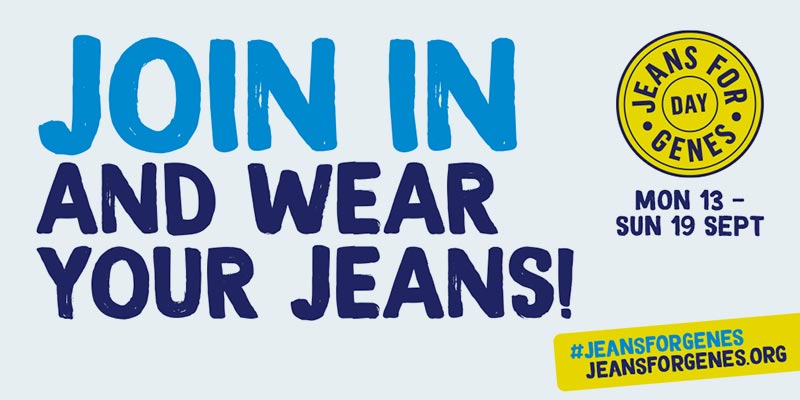 In ‘normal’ times, our teams have all worn denim and even double-denim (!) to the office. This year, although some of us might be working from home, we’re still donning our jeans in support of this important cause.

Every year, the Jeans for Genes campaign raises awareness of the daily challenges faced by people living with a genetic disorder. It also raises money to fund projects that make a real difference to the lives of those affected.

A genetic disorder is a disease caused either in whole, or in part, by a change or mutation in a person’s DNA sequence. These mutations can be due to an error in DNA replication, or due to environmental factors such as exposure to radiation or even cigarette smoke.

The Jeans for Genes campaign brings together the entire genetic disorder community, and shines a light on the incredible organisations that work tirelessly to improve the lives of those affected. The campaign also celebrates the many achievements of those who are living with a genetic disorder.

You can make a donation to Jeans for Genes here.

Although AlphaBiolabs does not offer DNA testing for genetic disorders, we do provide a wide range of DNA relationship testing services – and we salute our DNA colleagues working in the important arena of genetic disorders.

To learn more about our DNA relationship testing services, get in touch with our friendly Customer Services team on 0333 600 1300 or email info@alphabiolabs.com.