Which is worse: cannabis or alcohol? 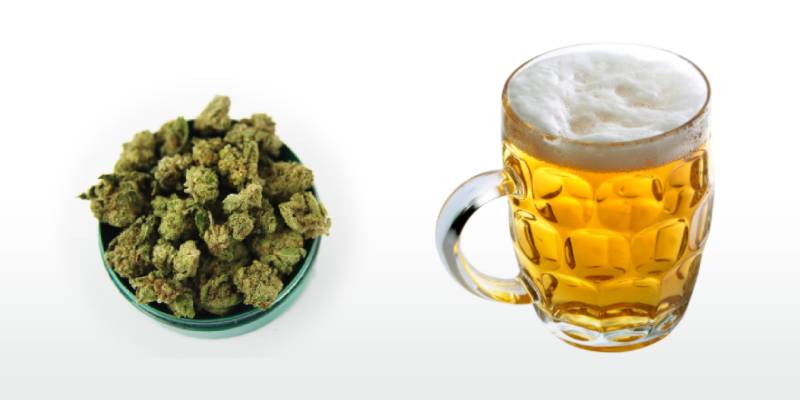 When it comes to addictions, which would you say was safer: alcohol or cannabis?

The debate has been stoked by the public social media feud between rapper Snoop Dogg and ex-footballer Paul Gascoigne. The US rapper posted a photo of himself and the former England midfielder on Instagram – comparing how they’ve aged after 27 years of using the two different drugs. Snoop, a lifelong advocate of cannabis, posted the photo to try and show that alcohol is worse for you than cannabis.

Paul Gascoigne, who has spent years battling alcoholism, didn’t see the funny side of the post and has since challenged Snoop to a charity boxing match, stating “Cannabis vs. booze – bring it on”.

Both alcohol and cannabis affect the body and mind differently depending on the individual concerned and the amounts consumed. But is one worse than the other?

How does cannabis affect you?

Cannabis use is increasingly becoming legal in different parts of the world and more socially acceptable even in places where it’s still illegal. Currently, the recreational use of cannabis is legalised in 11 states of the USA. Another 15 states and the US Virgin Islands have decriminalised its use.

In the UK, cannabis is the most widely used illegal drug and research shows 10% of regular cannabis users become addicted to it, according to the NHS.

Nikki Thorne, from the drug and alcohol misuse charity Addaction, believes that the mental impact of cannabis is the most dangerous part. The drug has been linked to severe mental illnesses including psychosis, schizophrenia, bipolar disorder and anxiety attacks.

“We increasingly encounter young people, who’ve started using cannabis to self-medicate when they are unable to regulate their emotions, that go on to develop mental health issues”, she said.

The problem is that many children believe the drug is safer than alcohol, as well as being easier to get, because they don’t need ID to buy it.

Cannabis use in the young is an important public health issue, particularly given that the drug available today tends to be much stronger than it was previously, say researchers from the University of Oxford and Montreal’s McGill University. The developing brain is particularly susceptible, they say, and their findings should act as a warning to families who consider cannabis use as part of the growing-up process.

Last year, 3414 patients under the age of 19 went to hospital due to mental and behavioural illnesses brought on by cannabis. This included two children aged nine or under. NHS figures show that the number of admissions has risen by 38% since 2013/2014, and by 10% in the past year alone. The concern is that these figures underestimate the scale of the problem.

Another warning from the NHS is that people who smoke cannabis regularly are more likely to have bronchitis. In addition, when the drug is mixed with tobacco to be smoked, it also increases the risk of getting tobacco-related lung diseases, such as lung cancer and chronic pulmonary obstructive disease (COPD).

Conversely, the drug can be used to alleviate symptoms in a variety of diseases such as cancer and multiple sclerosis.

How does alcohol affect you?

It is recommended that men and women shouldn’t drink more than 14 units of alcohol in a week. This equates to about seven pints of beer or seven large glasses of wine.

Like cannabis, alcohol can also have an impact on mental health. Excessive use has been linked to increased aggression, anxiety, depression and suicide.

The NHS says if you drink too much over a long period of time you can develop significant long-term health issues including heart disease, stroke, obesity, liver disease, liver cancer, mouth cancer, bowel cancer, breast cancer and pancreatitis.

In addition, binge drinking can often lead people to take risks they wouldn’t normally, both criminal and sexual. The WHO estimates that roughly 55% of domestic abuse perpetrators were dinking prior to assault. Women who are abused are 15 times more likely to abuse alcohol. In addition, cases involving severe violence are twice as likely as others to include alcohol.

So, which is worse?

According to the Office for National Statistics, there were 9214 alcohol-related deaths in 2016 while 24 deaths were linked to cannabis in the same year.

Dr Sadie Boniface, an addiction researcher at King’s College London, says both cannabis and alcohol are harmful and it’s impossible to say which is worse.

“The two have different effects, there are individual differences, and it would depend how often and how much you use”, she said.

But she argues that alcohol is a greater problem for society because it costs the NHS £3.5 billion every year.

“Roughly 80% of adults in England report drinking alcohol in the past year, compared with only about 7% who report using cannabis”, she says.

So, which to choose? On the surface, cannabis use appears to be safer than alcohol use. However, both substances come with potential long-term health risks, and legal and relationship complications. Which one is safer is still up to debate; but experts do agree that the safest option is to avoid both drugs altogether.

“Snoop Dogg’s meme brings attention to a topical issue, but we shouldn’t forget that cannabis-use disorders and alcohol dependence are both really serious”, says Dr Boniface.

Cannabis and alcohol testing from AlphaBiolabs

For information on any of AlphaBiolabs’ drug testing or alcohol testing services, call us on 0333 600 1300 or email info@alphabiolabs.com