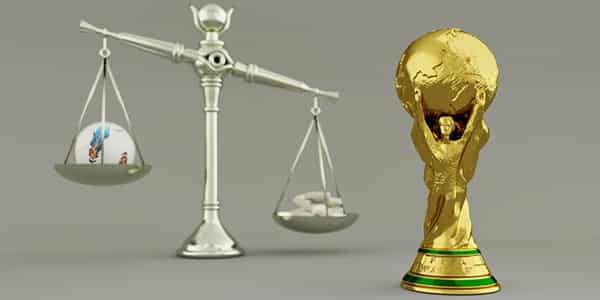 Whilst a significant proportion of the UK remains glued to their television sets as the World Cup competition enters the quarter final stages, a more worrying form of addiction has been highlighted. Drug traffickers are making use of World Cup merchandise to smuggle cocaine around the world. This highlights a longstanding relationship between drug trafficking and football, says InSight Crime: a foundation dedicated to the study of organised crime in Latin America and the Caribbean.

Huge worldwide sporting events, such as the Olympic Games, are a good opportunity for traffickers to conceal illegal drugs amid the flow of merchandise and swarms of travellers. As such, it is not surprising that they are taking advantage of the World Cup euphoria.

On 22nd June, 14 cocaine-soaked shirts styled like the Colombian national football team’s kit were seized by Colombian police at Bogotá international airport. Authorities said traffickers had dissolved approximately 5 kg of liquid cocaine into the shirts. Once the shirts arrived at their destination of the Netherlands, the drug was to be extracted and transformed into a powder ready for distribution.

As well as abusing the sport’s merchandise, some traffickers use football as a cover to set up international trafficking rings. InSight Crime believes that football matches are a favoured meeting place for drug traffickers, in particular the powerful crime bosses who hide in broad daylight.

The researchers explain that football has had a long relationship with drug trafficking, ranging from smuggling operations to higher-level criminal schemes. The relationship of Colombian traffickers and football can be traced back to the 1980s: the heyday of the Medellín and Cali Cartels. Both cartels are said to have financed various football clubs in Colombia and used them to launder substantial profits derived from cocaine trading.

Argentina’s most notorious, and often violent, football fans (the barras bravas) have also long been tied to drug crimes. Several have been accused of drug dealing, and of having relationships with drug trafficking gangs.

For expert advice on drug testing please call AlphaBiolabs on 0333 600 1300 or email us at info@alphabiolabs.com.