How do I understand my paternity DNA Test Results?

What are DNA STR markers?

Short tandem repeat (STR) markers are specific locations on a chromosome made up of sequences of repeated DNA. The STR markers that AlphaBiolabs examines are highly variable in length between individuals. Each individual has two copies of each STR marker, known as alleles: one is inherited from the father and the other from the mother.

Which DNA STR markers are examined?

AlphaBiolabs tests up to 42 STR markers including two sex markers as standard. These are:

How does the test work?

The two alleles observed at each STR marker are compared between the tested individuals. A full match of these alleles between individuals provides evidence of a relationship between them. Each allele is represented by two numbers. For example, if a father displays numbers 13 and 17.3 for one specific genetic marker, the child will need to display either the 13 or the 17.3 on the same genetic marker to show it has been inherited from the father. There will need to be a match with all the STR markers tested for an inclusion of paternity (A). 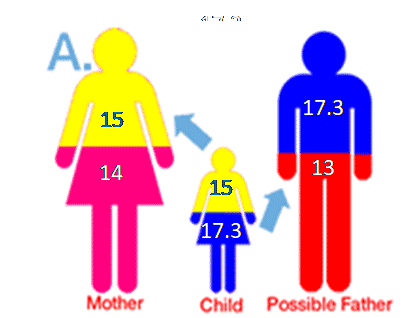 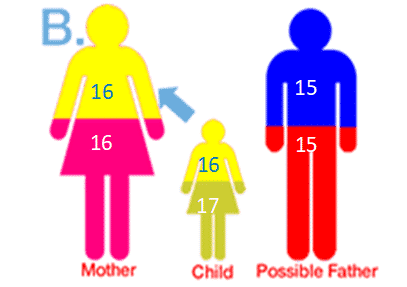 What is the probability of paternity?

A Laboratory testing relies on the statistical probability of the alleged father being the child’s biological father and not any other man from the same ethnic group who may share a similar DNA profile by random chance.

What is the combined paternity index?

Could the result be incorrect?

Further Frequently Asked Questions and lots more information can be found on the Learning Centre pages of our website: www.alphabiolabs.co.uk